Here's a short clip from my interview with Michael Swanwick. He told so many excellent stories I may ad another clip in the future. Enjoy and please feel free to let me know what you think.

Michael Swanwick on R. A. Lafferty from Andrew Mass on Vimeo.

I've been horribly remiss in updating this project page so today I'll be covering a bunch of topics in one big post and will follow up with some video in the days to come. So, here's what I've been doing:

-Interviewed Gregorio Montejo (Professor of Theology and Philosophy at Boston College) in his office at BC. We had a great discussion about Lafferty and really went deep into Thomas Aquinas, kairological time, aeviternity and Catholic mysticism in general. Great stuff. I'll try to post a bit of the interview soon.

-Attended LaffCon in New Jersey where I presented a short video and, more importantly, finally got to meet a lot of people from the Lafferty facebook group and watch (and film) some terrific presentations about Lafferty. Head over to laffcon.org to learn more about that event. 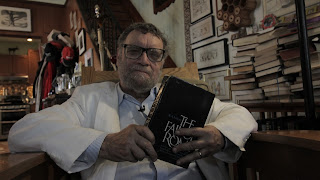 -Interviewed Michael Swanwick at his home in Philadelphia. Michael was able to discuss Lafferty in ways that few people could: as a writer, an admirer and as someone who (like Harlan) knew him a bit from conferences past. Mr. Swanwick's elite storyteller chops really come across in the interview as he retells some of his favorite bits from the Lafferty canon . I'll post some of this soon as well. It's taken me a long time to get that footage in order because, as usual, I made my one technical mistake by forgetting to turn on the camera mic--and have had to sync all the audio manually, just like in the olden days of five years ago.

--Interviewed Lissanne Lake, illustrator extraordinaire and longtime Lafferty compatriot. She told me a few Lafferty things I didn't know concerning original D&D, Generic Fandom and how to translate an author's vision into illustration. Lissanne also walked me through her Lafferty book covers in detail and then was kind enough to walk me to the buss stop, saving me a good bit of coin on the ride home.

I have more plans in the coming weeks and will try not to leave so much time between updates. Next up is speaking with Andrew Ferguson and getting myself down to Tulsa. Progress.
2 comments:

Harlan Ellison was kind enough to invite me into his home in LA, on short notice I might add, to talk about R. A. Lafferty. At one point during the hour-and-a-half conversation he brought out a stack of paper and told me they were all interview requests that he would not be taking. As much as I'd like to believe it was my exceedingly charming email that swayed him, it was clearly his love and respect for Lafferty and the chance to praise him on the record.

Harlan has quite a reputation for contentiousness, which you can get a sense of in the fascinating, Dreams with Sharp Teeth, documentary--so I entered the infamous Ellison Wonderland with a bit of trepidation and some concern at having to follow Robin Williams in the part of interviewer. Happily for everyone involved, I pledge to stay politely off-camera, and Harlan was beyond gracious.

We talked about the first story of Lafferty's he read, Narrow Valley, and how RAL burst onto the scene like a "cosmic explosion". He told stories about RAL at the many conventions where they met over the years--how Harlan chased him around and would sit for hours drinking with him at a bar, even though Harlan didn't drink. We talked about writing, structure, the New Wave, religion, editors and publishers--but I think my big take-away was how much Harlan really cared about him; his hands coming to one of their only moments of complete motionlessness as they held his bent head, mumbling, "god I loved him".

So, here's a short promotional video (above) from the Harlan interview. I'll try to put out things like this as I talk to different people along the way. Of course there will be more of Harlan in the finished documentary, and if people want I might put out more of the interview online. One note: I'm still playing with titles (seen at the end of the video) so if anyone has any ideas I'd be happy to hear them.

You can email me at: amkass@gmail.com

Andrew Mass
I've worked as a journalist, advertising copywriter and creative director, and run the upside-down Ferris wheel at a traveling carnival. Just don't ask me to spin you.